• German Foreign Minister Annalena Baerbock to be on a two-day visit to India , Baerbock  to hold a meeting with External Affairs Minister(EAM) Dr  S Jaishankar in New Delhi at 11  AM

• Gujarat Assembly Election , Voting to take place at 93 constituencies spread over 14 districts including Ahmedabad, Vadodara & Gandhinagar between 8 AM to 5 PM

• Assam government to observe ‘Development Fortnight’ from Dec 5 to Dec 18 & during this period works of various development projects, schemes worth Rs 15,000 crore to start in several districts of state

Thought of The Day for Daily School Morning Assembly

Trust goes out from the same door, from which the doubt comes in.

General Knowledge is a very important part of Morning Assembly, Students can learn new things with these gk Questions.

Name the Indian who won the Miss Universe crown for the first time?

Who was the first Speaker of Lok Sabha?

Who was the first woman Chief Minister in India?

Who was the first Railway Minister of India post-independence?

Who was the first woman to receive the Bharat Ratna?

India is my country. All Indians are my brothers and sisters.

I love my country. I am proud of its rich and varied heritage.I shall always strive to be worthy of it.I shall give my parents, teachers, and all elders, respect, and treat everyone with courtesy.To my country and my people, I pledge my devotion.In their well-being and prosperity alone, lies my happiness.

For the Latest Educational News (CBSE, ICSE, and State Board News) and live news updates, like us on Facebook or follow us on Twitter and Join our Premium Telegram Channel. Read more on Latest Exams & Results News on edufeednews.com. 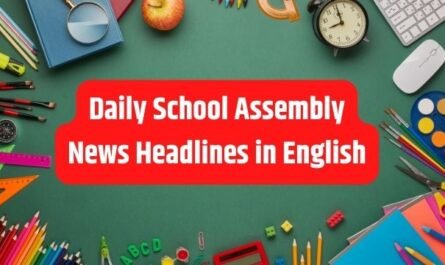