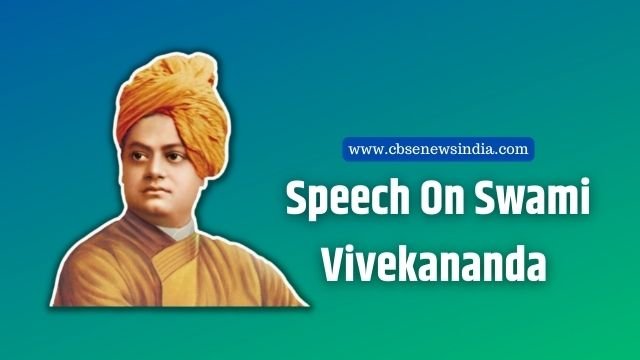 Speech On Swami Vivekananda in English

Present here, Mr. Principal, respected teachers and my dear friends. First of all I would like to thank you all for giving me the opportunity to express my views on the great spiritual guru Swami Vivekananda through this forum.

Swami Vivekananda is the person from whom crores of youth not only in India but all over the world take inspiration today. His precious thoughts and words of wisdom work to instill enthusiasm in the youth.

This is the reason why today 12 January is also celebrated as National Youth Day in India. Swami Vivekananda was born on January 12 in Kolkata. His childhood name was Narendranath Dutt. Only at the age of 25, Narendranath took the path of spirituality. After adopting the spiritual path, he came to be known as Swami Vivekananda.

Whenever Vivekananda is talked about, the speech he gave in the year 1893 in the Parliament of Religions in Chicago, USA is definitely discussed. This is the speech that presented India with a strong image in front of the whole world. When Swami Vivekananda started his speech by addressing ‘America’s brothers and sisters’, applause continued in the hall for two minutes. From that day, India and Indian culture got recognition all over the world.

Swami Vivekananda established the Ramakrishna Mission in Calcutta on 1 May 1897 and the Ramakrishna Math at Belur on the banks of the Ganges on 9 December 1898. Swami Vivekananda had asthma and diabetes, due to which he died at the very young age of 39 years. But at such a young age, he got so much fame all over the world which is an example for every youth. He taught how important youth is.

Friends, today on the occasion of Youth Day, let us not only remember him and pay homage, but let us also take a small part of his knowledge, words, lessons and character in our lives. If we all take even a small part of the knowledge given by them into our lives, then nothing can stop us from being successful. With this I conclude my speech and I hope you liked my speech.

Hope You would Like the Speech On Swami Vivekananda.